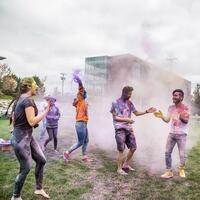 Holi is a spring festival, also known as the festival of colours or the festival of love. It is an ancient Hindu religious festival which has become popular with non-Hindus in many parts of South Asia, as well as people of other communities outside Asia.It is primarily observed in India, Nepal, and other regions of the world with significant populations of Hindus or people of Indian origin. In recent years the festival has spread to parts of Europe and North America as a spring celebration of love, frolic, and colours.

It is a  carnival of colours, where participants play, chase and colour each other with dry powder and coloured water, with some carrying water guns and coloured water-filled balloons for their water fight. Anyone and everyone is fair game, friend or stranger, rich or poor, man or woman, children and elders. The frolic and fight with colours occurs in the open streets, open parks, outside temples and buildings. Groups carry drums and musical instruments, go from place to place, sing and dance. People visit family, friends and foes to throw colours on each other, laugh and chit-chat, then share Holi delicacies, food and drinks. In the evening, after sobering up, people dress up and visit friends and family.

The festival signifies the victory of good over evil, the arrival of spring, end of winter, and for many a festive day to meet others, play and laugh, forget and forgive, and repair broken relationships, and is also celebrated as a thanksgiving for a good harvest.

Holi is celebrated on JWU campus since last 9 years and in its 10th year would be fun to smear colors on each other's face, play with each other and enjoy the event.