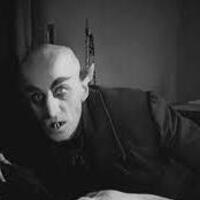 “NOSFERATU” Featuring Live Accompaniment and an Original Score by the Dave Tessier Band.

Please join us for a very special event: The classic 1922 silent classic "Nosferatu" with an original score played live, on stage, by the Dave Tessier Band.

ABOUT THE MUSIC: David Tessier is a critically acclaimed actor/composer from RI, active in the RI arts community for the last 3 decades. He is the music director for King Richard’s Faire and is the founder & leader of the “All-Star Band of All-Star Stars,” a musical collective created to perform pieces and works from Jesus Christ Superstar to the Monkees. featuring Jon Brennan (vocals/keys), Paul Sousa (bass), Nate Goncalo (drums/vocals) and Justin Grankewicz (vocals/percussion). David is a recording artist for the 75orless label with whom he has released “The Taurus EP” (2011) and “Dreams In Hyperspace EP” (2018).

Tickets for the JWU community are free and can be obtained on JWULink by selecting "Get Tickets" from the news page. For staff without access to JWULink ONLY: head to jwu.universitytickets.com and register as "General Public."